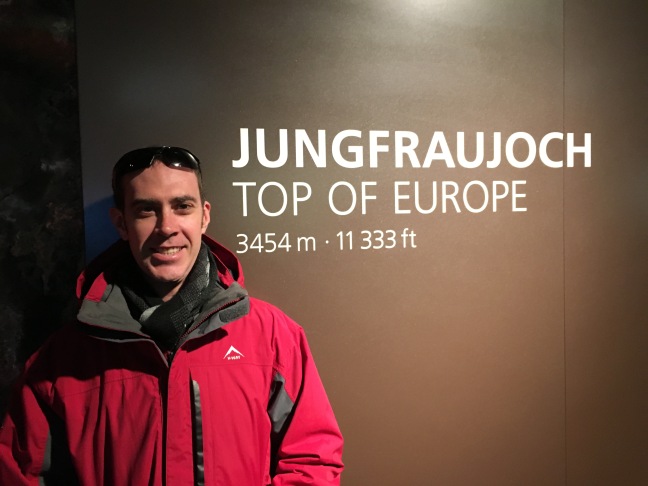 After the first parts of the Switzerland Adventure, exploring two wonderful Swiss cities, the awesome Michelin Star dining experience and the beautiful train and journey to Interlaken, it was time to explore the Jungfrau Region in the Bernese Alps.

After a lovely breakfast of cold meats, cheeses, breads and hot chocolate at the Hotel Alpenrose in Wilderswil, it was time to head into the mountains on an adventure to the Top of Europe. The route would be one which would become a very well travelled one over the next week. First on the travel plan was the train journey from Wilderswil through Zweilütschinen to Lauterbrunnen. Then there was a change of trains which would continue the journey through Wengen to Kleine Scheidegg. On segment of the journey two iconic sections of the Lauberhorn Downhill Skiing World Cup course were visible. Firstly the section called Wasserstation tunnel where the course drops under the railway bridge and secondly the famous signature Hundschopf jump – about a 40-60m jump over a rock nose. The Lauberhorn Races, hosted in Wengen in mid January, have a very interesting a rich history. First held in 1930, it is one of the oldest continuously held downhill races. It is also the longest downhill on the World Cup circuit at about 4.4km when most others are typically 3.2km or so. The Haneggschuss section is where the Frenchman Johan Clarey set the fastest speed ever recorded in a World Cup race in 2013 – a staggering 161.9 kilometres per hour! Top speeds on the Haneggschuss regularly approach 160kph. For the brave adventurers the course is open to ski after the World Cup events (Downhill, Slalom and Combined) and is listed on piste maps as Lauberhorn-Weltcup Abfahrt and carries number 45.

Kleine Scheidegg is the end station for most people as it is an access point for the start of many of ski slopes and also has some great Après-ski places. But for the adventurers it was the sight of a change of train onto the Jungfraubahn. The Jungfraubahn has a really astonishing history! The concession for the railway was received in 1894 by industrialist Adolf Guyer-Zeller. In 1896 construction of the railway began. The Eigergletscher Station at the foot of the Eiger mountain was opened in 1898. The tunnel section to the Eigerwand Station was opened in 1903 and the tunnel section to Eismeer was opened in 1905. Finally in 1912, on the 21 February, the tunnelling crew breaks through the glacier at Jungfraujoch. In the construction years there were two explosions, a four month strike and 6 workers were killed. The station at Jungfraujoch is the highest railway station in Europe. The first stop on this part of the trip was at Eigergletscher (2320m) where there is a restaurant but more of that in the next blog post. The next stop is for about 5 minutes at a viewing platform of Eigerwand (2865m) followed by another short stop at Eismeer (3160m). Finally the train stopped at Jungfraujoch – Top of Europe (3454m)! After admiring the beautiful view down the glacier, it was time to tour Jungfraujoch through the network of tunnels. The first part of the tour took the adventurers to an area containing information on the research station at Jungfraujoch and the observatory. It was here which some free Lindt Chocolate was being handed out, the significance of which will be revealed a bit later. A lift ride followed which took us to the Sphinx Observatory and out to the viewing platform to savour some of the breathtaking views of the Mönch and Jungfrau peaks. The tunnel route continued through the Alpine Sensation which had Alpine themed wooden carvings. Next was a section on the history of the construction. Then there was the Eispalast section. This whole tunnel section was made from ice and had ice carvings of animals at various points. The somewhat cooler Eispalast section prepared the adventurers for the next section of the Jungfraujoch tour – outside again but this time on the ground instead of the viewing platform of the Sphinx Observatory. This part had a large Christmas tree. The tour continued with the second last stop. This stop would be considered the best by many people. It was at none other than a Swiss icon – the Lindt Chocolate Heaven mini museum and shop! Naturally chocolates were bought at this shop. The end of the tour was at a well stocked souvenir shop. Here is a collection of some of the many photos taken at Jungfraujoch. Please click on them to see the larger image.

The adventurers then had a choice to either search for some lunch at Jungfraujoch or head down to Kleine Scheidegg for some lunch. The decision was made to head to Kleine Scheidegg. After a bit of a wait the train journey was undertaken in reverse, with only the Eigergletscher stop. A late lunch was had at Röstizzeria comprising of a dish which would be repeated many times over the remainder of the Swiss Adventure. This was traditional Swiss Alpine Macaroni. I will divulge into that in more detail in the next post. The local Rugenbräu beer was enjoyed as well. Then it was time to catch the Wengenalpbahn back down through Wengen to Lauterbrunnen. The Wengenalpbahn is actually the world’s longest continuous rack and pinion railway at 19.091 kilometres. It links Lauterbrunnen and Grindelwald with trains from both terminating at Kleine Scheidegg which is located between the two. From Lauterbrunnen the Berner Oberland Bahn train was travelled on to Wilderswil.

The evening was all about reuniting with old friends, for some, and meeting new friends, for some, but most importantly having a good old South African kuier, for all! While the two adventurers were frolicking in the mountains the other South Africans, who now live in the United Kingdom and Ireland, arrived. These were Lindie, Louis and Wilco. Our fantastic hosts, Carel and Ryan, kept all our glasses filled with Moët and/or Chocolate Block red wine throughout the evening. The dinner of lamb, vegetables, salad and a strawberry dessert was excellent. Carel and Ryan did, in the words of my Grandfather, excel themselves! After dinner the kuier continued with music and dancing as well as the European tradition of exchanging Christmas gifts on Christmas Eve. For all my non-South African fellow adventurers the word “kuier” is an Afrikaans word meaning visit according to a strict translation but is also used in the wider sense of really connecting with the people present through the related activities etc of the visit. After a great kuier it was time to recharge and catch some sleep.

If you enjoyed this adventure to the Top of Europe then please like and share so that others can also experience the adventure we (you and I) have just been on. Comments are appreciated. Please check back soon for the next episode of the Swiss blog posts. You can also see more pictures from the Switzerland Adventure on my Instagram – @andyrlapin.